Dobrila Berković-Magdalenić was born in Zagreb, Croatia, where she graduated with professor Milan Nagy at Zagreb Music Academy. Having devoted her life to teaching, she’s been heading Cello Departments of all the music schools in Croatia for many years, as well as Croatian String Teacher’s Association (national branch of ESTA)

In 1987, as president of the Croatian branch of ESTA, she established UPBEAT (International Summer Music School), which includes masterclasses, classes for children, and Chamber Music Festival. Every year over 500 young musicians participate in a variety of classes held by world famous teachers and performers, thus making UPBEAT the biggest event of this kind in Croatia. Dobrila Berković-Magdalenić has also founded Japanese branch of UPBEAT Festival.

Having published her first book for beginner cellists in 2011, professor Berković-Magdalenić keeps herself busy preparing materials for several more books.

With exceptional interest and success she has been devoted to teaching at Music Atelier Tartini in Ljubljana , the first private music school in Slovenia,which she and her husband Vlado Repše founded together in 1990.She is the author of several textbooks and manuals,she is the lecturer at the seminars and international congresses,she also researches the methodology of the violin playing,as well as being the mentor to young teachers.

She has got two daughters,Maja and Sanja,who both are alert musical artists and pedagogues. 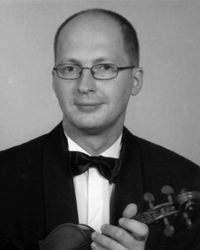 Anđelko Krpan (Zagreb, 1967.) graduated in Violin at the Academy of Music in Zagreb in the class of Kristijan Petrović (1989), and went on to earn his Masters at the HochschulefürMusik und Darstellende Kunst in Vienna in the class of Dora Schwarzberg (1995). He has been a member of the Vienna Chamber Philharmonic (1989-93), then member of the Zagreb Soloists (1993-97), orchestra leader of the Zagreb Soloists (1997-2002), concertmaster of Croatian National Theatre Orchestra of Zagreb (2002-2006), and has been teaching Violin at the Academy of Music in Zagreb since 1995. He is one of the founders and the first violinist of the Sebastian String Quartet.

Anđelko Krpan won first prize at the Alpe-Adria International Violinist Contest in Italy (1988), the Croatian Music Institute prize (1989), sixth prize at the Vàclav Huml International Violinist Contest in Zagreb (1993), and the Ivo Vuljević Music Youth prize as the best young Croatian musician in 1993. In 1999, he was officially decorated with the Croatian Morning Star Order with the Image of Marko Marulić. He received the Croatian Society of Music Artists Milka Trnina Award in 2008 for his exceptional artistic achievements. He received the Porin Prize for the CD Croatian Sonatas recorded in collaboration with the pianist, Nada Majnarić.

Russian born Austrian-Croatian violist and conductor Wladimir Kossjanenko studied viola from 1986 to 1991 with Vladimir Stopitchev at the Conservatory in St. Petersburg. Whilst studying he appeared as a principal violist and assistant-conductor of the “Ensemble of Leningrad Soloists”. In 1991, following an invitation from the Gustav Mahler Youth Orchestra directed by Claudio Abbado, he came to Vienna. He continued his studies with Hans Peter Ochsenhofer and Thomas Kakuska at the Vienna University for Music and Performing Arts (graduated 1999 with distinction and Master of Arts degree) and later with Michael Kugel at the Royal Conservatory in Ghent, Belgium. Important artistic experience he gained in the master classes with Norbert Brainin (Amadeus Quartet), Walter Levin (LaSalle Quartet), Gunter Pichler (Alban Berg Quartet), Milan Škampa (Smetana Quartet), Joel Krossnick (Julliard Quartet) and Issac Stern. Between 1993 and 1996 he was a regular substitute with Vienna Philharmonic. From 1994 to 1998 he was a principal violist of the Graz Philharmonic Orchestra and Graz Opera House. From 1998 to 2007 Wladimir Kossjanenko was member of the Hugo Wolf Quartet and was awarded the European Prize for Chamber music in Paris in 1999 and the “Pasticcio” Prize of the Austrian Radio in 2003. With the Hugo Wolf Quartet he made extended concert tours throughout Europe, North and South America, United Kingdom, Ireland, Korea and Japan. In the past 20 years Wladimir Kossjanenko has appeared as a soloist and chamber musician at most prestigious concert venues, among them in: Carnegie Hall New York, Suntory Hall Tokyo, Concertgebouw Amsterdam, Tonhalle Zürich, Konzerthaus Lucerne, Royal Albert & Wigmore Hall London, Birmingham Symphony Hall, Berliner & Kölner Philharmonie, Cité de la Musique Paris, Palais des Beaux-Arts Bruxelles, Tchaikovsky Conservatory Moscow etc. He appeared as a soloist with Bayerische Kammerphilharmonie, Zagreb Soloists, Jerusalem Festival Orchestra, Les Orpheistes Orchestra Sofia, Capella Lutherana Vienna, Arthur Rubinstein Philharmonic Orchestra, Zadar Chamber Orchestra, The Virtuosos of Split, Vienna Academic Symphony Orchestr etc. As a conductor he has appeared in Austria, Germany, Bulgaria and Croatia.

Wladimir gave master-classes for viola at University of St. Andrew, Guildhall School of Music London, Royal Conservatory Maastricht, University of Sapporo, International Orpheus Academy Vienna, Rencontres Musicales Internationales des Graves, Thessaloniki State Conservatory, Academy of Music Ljubljana, New Bulgarian University Sofia, Music Academy Sarajevo, Royal Coservatory Brussels. He was a Jury-member of the Watson Forbes International Viola Competition in St Andrews, International Rudolf Matz Competition in Dubrovnik, Boris Papandopulo Competition in Zagreb. Since 2008 he has been professor for viola and chamber music at the Academy of Arts at the University of Split/Croatia. Since 2009 he works regulary with the Zagreb Soloists. 2012 he founded together with the pianist Vesna Podrug a festival “Day`s of J.S.Bach in Split”, which is organized annually for the birthday of the composer. In 2012 he founded a String orchestra “The Virtuosos of Split” and become its conductor and artistic director.

Eldar Saparayev is a Kazakh – German violoncellist and conductor born in Almaty (Kazakhstan). He received his first violoncello lessons from his father Zaur Saparayev and continued his studies with Susanne Basler, David Geringas and Bernard Greenhouse. He has performed as a soloist, violoncellist at many important venues across Europe, Asia, South and North America. Jacques Leiser, manager of famous musicians such as S. Richter, D. Oistrakh, M. Callas… described Eldar Saparayev as „the grand virtuoso of the past eras, a true musician and poet with a vast passion and individuality“.
In 2016. Saparayev earned his Master of Arts Degree in Conducting at the Conservatorio della Svizzera Italiana (Lugano, Swiss). He holds the position of the Principal cellist at the Südwestdeutschen Philharmonie Orchestra in Konstanz, Germany and is a member of the Philharmonische Cellisten Köln. Adding to the mentioned achievements, Eldar Saparayev works as the Guest Conductor of the Astana Opera Orchestra, and is a memeber of the Wilhelm Fürtwängler Foundation. Eldar Saparayev plays on the 1679 „Bein, Beare“ violoncello made by Nicolo Amati, kindly offered by the Strad Society in Zürich.

Nadia Varga Modrić (Cakovec, 1982.) started to play piano at the age of five. Her first teacher was her mother. Later on she continued at the Music school in Varazdin in the class of prof. Ivana Hercezi and Jelica Kuzmin. She is the winner of the national competition HDGPP, international competition “Etide i skale” , chamber music competition (piano duet) with her colleague Domagoj Guscic. She was also a finalist of the prestigious piano competition “EPTA” in 1999.

She finished her masters at the University of Music and performing Arts in Graz in the class of prof. Eike Straub. She also attended many masterclasses held by affirmed pianists and professors such as Jurica Murai, Laszlo Baranyaj, Erika Frieser, Michael Gees, Chia Chou (Trio “Parnassus”), Stacey Bartsch…

As a soloist, accompanist and chamber musician she performed all around Croatia and Europe (Austria, Hungary, Italy , Germany, Slovakia, Liechtenstein, Switzerland…).
She was employed as an official accompanist on masterclasses held by Rudolf Leopold (Austria), Gerhard Mantel (Germany) and Valter Despalj (Croatia).
She recorded for HRT (Croatian national radio-television) and ORF (Austrian national radio- television).

She was supported by “Musik und Jugend” foundation. As a soloist, she performed with the Croatian Radio Television Symphony Orchestra and Croatian Chamber Orchestra. As a duet with her sister, Zita Varga/cello, she held a recital at the “Sommets Musicaux de Gstaad” in Geneve and Osor Musical Evenings. The duet is the winner of the “Darko Lukic” and “Concert Hall Vatroslav Lisinski” prizes..

Domagoj Gušćić (Zagreb, 1982) received his graduate and postgraduate degrees from Academy of Music, University of Zagreb, where he had studied with Prof. *uro Tikvica, also having attended masterclasses with distinguished pianists such as Eugene Indjic, Noel Flores, Boris Romanov, Irina Osipova, Zinaida Ignateva, Ivan Urvalov, Irina Kataeva and others. Domagoj performs both as a soloist and a chamber musician, having performed extensively throughout Croatia, Slovenia, Austria, Norway, Switzerland, Germany, Italy, Hungary, Russia and the USA. He was awarded several significant awards at international piano competitions in Russia, Italy and Macedonia.

Domagoj gave solo performances with Zagreb Philharmonic Orchestra, Vara#din Chamber Orchestra, Academy of Music, University of Zagreb Symphony Orchestra, Zagreb Youth Chamber Orchestra and of Pavao Markovac Music School chamber orchestra. He’s been collaborating with Croatian Radio Television Symphony Orchestra as an orchestral pianist since 2014, with which he also recorded an episode for the television show Maestro which aired in October 2014. His other collaborations include Zagreb Philharmonic Orchestra since 2016 and Wien International Soloists Ensemble since 2015.

Domagoj has performed extensively at festivals such as Nei Suoni dei luoghi in Italy, Hugo Staehle Festival for Young Pianists in Kassel, Germany both as a performer and a member of faculty, and Vareü Classic Festival in Bosnia and Herzegovina. He was a guest lecturer at the Transformation of Music Education: Tradition and the Present international conference in Odessa, Ukraine in May 2012. His other notable performances include recitals at concert seasons such as Youth in Lisinski, Young Musicians at Matica Hrvatska and Virtuoso in Zagreb.

Domagoj is currently employed at the Academy of Music, University of Zagreb as a collaborative pianist.